Vibration monitoring of critical infrastructure is paramount. Failure from strong shaking due to earthquakes and other sources can cause damage or even critical failure. Such events can have major consequences. As such, the monitoring of the health of these assets is critical for operational continuity and public safety. The type of instruments that need to be installed to monitor a structure will depend on the desired outcomes. Some applications require an immediate alarm to be generated based on a certain level of ground velocity (mm/s) or acceleration (g). Whereas, others require an instrument that can detect very low amplitude low-frequency motion while maintaining a very high clip level (where the signal hits the maximum allowed value) to be able to determine the resonant modes of the structure. 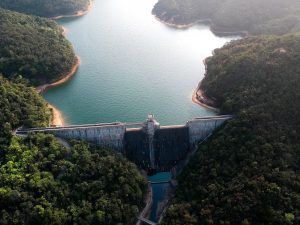 Local earthquakes are one of the dangers that can affect water storage and hydropower dams, and mine tailings storage facilities (TSFs). For Australia in this context, local earthquakes are defined as those that occur within about 300km, based on the maximum credible earthquake (MCE) magnitude of Mw7.5 for our continent. Beyond this distance, the energy released from the biggest of earthquakes is unlikely to damage a well-engineered structure. Earthquakes that occur within this radius can contain a wide range of ground motion frequencies, from less than 1Hz to greater than 100Hz. Most large structures have natural periods 10Hz range, so the instruments used need to be sensitive to very low frequencies to record how they resonate when shaken at these low frequencies.

In recent years there have been some notable instances of damage or failure of dams and TSFs due to ground movement. Damage to a structure from an event can at times be obvious, but in some cases, a failure may occur after a series of events that may have a cumulative effect on the integrity of the structure. There are cases where the extent of internal damage was unclear due to a lack of vibration monitoring instrumentation to quantify the amount of dynamic motion sustained during an earthquake, leading to decades of ongoing investigations, both to quantify the movement of the structure, and to mitigate the effects of the potential damage that may (or may not) have been within the design parameters.

Acceleration sensors, or accelerometers, tend to have a linear frequency response down to DC (close to zero Hz), which means that the amplitude of ground motion that they measure at low frequencies is consistent with the same amplitude recorded at higher frequencies. The limitation of accelerometers is that their self-noise levels tend to be relatively high, meaning small-amplitude low-frequency signals are obscured, which in turn means that the natural period response of the structure can’t be determined or compared pre- and post-earthquake. 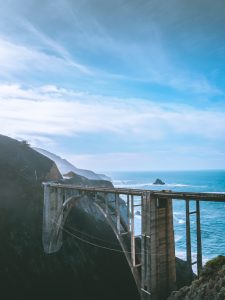 Passive geophones (mechanical velocity sensors) are good at recording high frequencies and have very low self-noise, but at low frequencies, the linearity of the amplitude starts to diminish. This can be improved by electronically manipulating the signal, but this tends to introduce noise, which defeats the purpose. The low-frequency response of a geophone is usually it’s primary specification, such as 14Hz, 10Hz, 8Hz, 4.5Hz, 2Hz, or 1Hz.

In-mine seismic monitoring systems are designed to detect high-amplitude high-frequency events within a few hundred metres, so will typically use 8Hz or higher frequency geophones, but these are not suitable for structural monitoring as they lack the sensitivity and low-frequency linearity to reflect how the structure responds. Even above-ground blast-spec instruments that use 4.5Hz geophones are missing the required sensitivity and linearity to detect local earthquakes and show structural resonance. As with most things you need to trade-off some factors for others, in this case, range, noise level, linearity, sensitivity, and cost.

A major factor of system sensitivity comes from the data logger. Traditional mining and exploration seismic recording systems focus on large nearby events, so the resolution of the system is less important than the ability to record the peak amplitude. While a 16-bit system can record a high peak particle velocity (PPV), you cannot calculate the natural period of a structure when the level of ambient vibration is all within the bottom few bits of data. Modern 24-bit low-noise recorders offer up to 256x more resolution to allow the natural period to be revealed while maintaining the peak measurement range.

If the application requires that an alarm is raised at a particular level of ground velocity, we recommend using a 2Hz geophone-based system. The Gecko Tremor uses these sensors, giving a measurement range of up to 254mm/s, which is adjustable to a lower clip level if additional sensitivity is required. If the application requires that data is recorded as acceleration, then a low noise accelerometer would be recommended.

An instrument like the Gecko SMA-HR has a clip level of ±2g (an acceleration level that is unlikely to be exceeded, even from a nearby Australian MCE) while maintaining a low-frequency sensitivity that can record a structure swaying back and forth at a period of many seconds per cycle. The lower-spec Gecko SMA can record ±2g and higher (ideal for near field blast monitoring), but the sensors used in this model have a noise level hundreds of times higher than the SMA-HR, so the full range of movement of a structure may not be visible.

In summary, if your structural monitoring system is based around recording ground velocity, be sure to use passive geophones with a low-frequency linear response below 4.5Hz (2Hz or 1Hz), and if you are analysing the response of your structure using acceleration sensors, use sensors with very low self-noise (less than 30µg over the DC-200Hz bandwidth) so that you capture the natural period and full frequency response of your structure from all local events. The only way to be sure how a structure moved during an earthquake is to record it, and having instruments installed on and throughout a dam or TSF to verify that it responded as expected will help in the management of the asset, and provide data to engineers for improvements to existing and future structures.